No other country’s green transition approaches the scale of China’s, where a world powered by the sun is quickly taking shape.

Atop the Tibetan plateau in Qinghai province, northern China, sits the Longyangxia Dam facility, a 27-square-kilometer solar farm that is filled with a sea of four million deep blue-colored photovoltaic panels.

When construction was finally completed in 2017, it became the largest solar farm in the world, capable of producing 850 megawatts of power — enough to supply electricity for 200,000 households. But now the Longyangxia Dam facility has been shunted out of the world’s top 10 largest solar farms. In fact, it’s not even in China’s top three.

“People don’t really comprehend the scale China is operating at,” says Tim Buckley, a global energy analyst and director of think tank Climate Energy Finance. “The solar industry was dominated by Japan 15 years ago, then the Germans really ran with it 10 years ago. But China invested in its own right and has scaled up incredibly.”

Today, China has the world’s largest renewable power capacity, including 323 gigawatts of solar, around a third of the entire global total. President Xi Jinping wants to increase that to 1,200 gigawatts by 2030 -- more than the world’s current total -- but rapid deployment means the country is likely to reach the target years early. In 2022, it’s set to add a further 108 gigawatts of solar power, double last year’s record amount.

Experts say that China’s glowing solar power success shows there is light at the end of the tunnel for a global green energy transition. Renewable energies like solar are key to reducing emissions in the electricity sector, which is the single largest source of global CO2 emissions. According to the International Energy Agency, if the world is to reach net zero by 2050, almost 90 percent of electricity will need to come from renewable sources, with solar and wind likely accounting for most.

“I think we will see a massive energy transition and it will happen much more quickly than many of us expect,” says Professor Martin Green, an expert in solar energy at Australia’s University of New South Wales. “It seemed like science fiction a few years ago. But it’s all in place now and just needs scaling up and the will to do so.”

The climate benefits of China’s solar revolution are clear: As the world’s largest CO2 emitter, China’s efforts to decarbonize its energy system will be critical, and it has committed to becoming carbon neutral by 2060. Solar is a great way to do so: Within about four to eight months, solar panels have offset its manufacturing emissions, and have an average lifespan of 25 to 30 years. China’s rapid shift away from coal-burning will also help reduce air pollution in its smog-clogged cities, benefiting public health as well as the environment.

Huge infrastructure investment has also kept China’s economy ticking along at an impressive pace. Last year, the country’s public and private investment in clean energy was $381 billion, according to the IEA, greater than all of North America by a margin of $146 billion. China is likely to invest a further 13 trillion renminbi ($1.89 trillion) in green energy through 2025, according to ANZ Research, the equivalent of 16 percent of its total infrastructure investment.

The upshot of all this investment has been a downward impact on cost. As technology has improved and scale has increased, the cost of producing electricity with solar panels has plummeted dramatically: from $106 per watt in 1976 to $0.38 per watt in 2019. The last decade alone has seen an 80 percent decrease, meaning it is now cheaper to produce electricity through new solar projects than fossil fuels.

And it’s set to fall further: Researchers project that solar could provide 43.2 percent of China’s electricity needs in 2060 for less than $0.03 cents per kilowatt-hour. It’s a point that has not been missed by big business -- BYD, one of the world’s largest electric vehicle manufacturers, stopped making combustion engine vehicles in April and now only produces electric or heavily electrified hybrids.

“Relative to competition, solar has never been more affordable, even with inflation,” says Buckley. “And I expect costs to come down dramatically across this decade.”

Yet the geopolitical consequences of China’s domination of solar power have led to imbalances in solar supply chains, according to a report published in July by the IEA. Manufacturing has moved out of Europe, Japan and the US over the last decade. Now, China’s share in key manufacturing stages of solar panels -- polysilicon, ingots, wafers, cells and modules -- exceeds 80 percent, and is set to rise to more than 95 percent. That presents an “energy security” risk for many nations, as recent global events have shown.

“The rise in solar efficiency thanks to China is huge and the whole world has benefited from it,” says Heymi Bahar, senior analyst at the IEA and author of the report. “But with the pandemic and Russia’s invasion of Ukraine, many governments are realizing that their supply chains must be diversified. They can’t allow themselves to be vulnerable.”

After years of falling further behind, the US is aiming to ramp up its role in the solar revolution. In August, President Joe Biden signed into law the biggest climate bill ever passed in the US, which includes $369 billion for clean energy. It includes billions in subsidies for the clean tech manufacturing sector to compete with China as a key supplier of critical equipment for renewables, as well as grants and loans for auto companies to produce electric vehicles, $3 billion for the U.S. Postal Service to buy zero-emissions vehicles and $2 billion to accelerate research.

“There’s a technology race that the US is losing,” says Buckley. “But as soon as the US comes to the party, you know they will come at a million miles an hour.”

Professor Green argues that a more diversified industry, which is already beginning to emerge, will provide greater supply chain security and stability. Europe has plans to take up solar much more quickly because of Ukraine, he says, India is quickly growing capacity, while Vietnam has had a big rise in solar energy consumption and Chile has ramped up installation. “Now the whole world knows how to make solar cheaply,” he says. “While I don’t think that Europe or the US will be able to produce as much as China or as cheaply, there will be trade tariffs to balance that out.”

Some constraints, however, remain. Solar requires significant upfront spending on capital -- even if it is paid back handsomely over the years-long lifespan of panels -- and that requires political backing. The sparsity of sunlight in cold regions like northern Europe is another issue, but even that is being addressed with the development of subsea cables, capable of transporting solar energy thousands of kilometers. And there are concerns about the impact of massive solar farms on ecosystems, but growing recognition of that risk has spurred the development of pollinator-friendly solar scorecards and farms that integrate solar and livestock.

For now, it’s full beam ahead: the IEA projects that solar will provide at least a third of global energy by 2050. But that will require global production capacity to more than double by 2030, for existing production facilities to be modernized, and the development of grids and storage. The role of electric vehicles -- what Buckley calls “batteries on wheels” -- are likely to play a role in accelerating solar, too. “I don’t see why solar can’t get dramatically bigger than it is today,” he says. 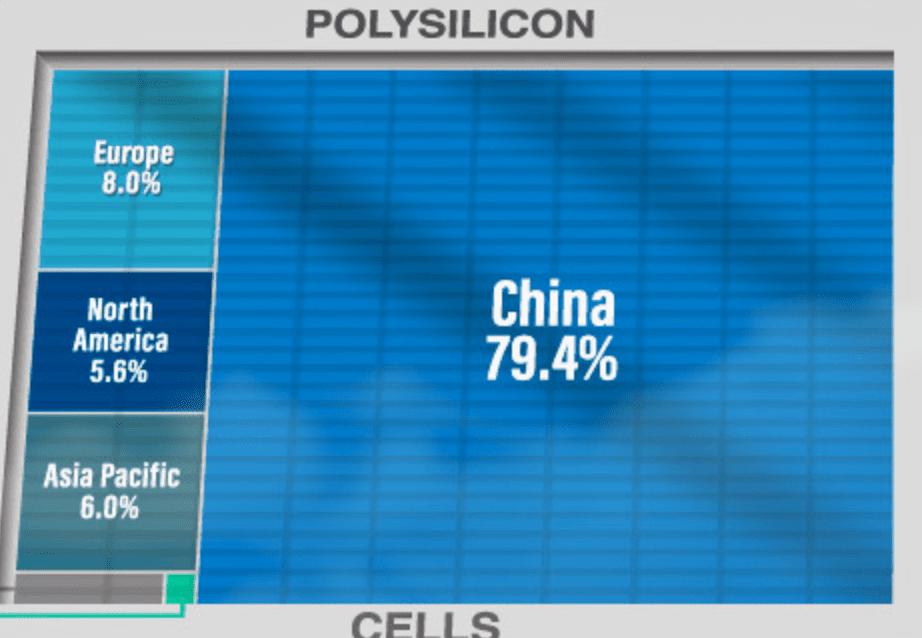 These visuals show just how much of the global solar supply chain runs through China.

It’s not just a global game: As the world goes solar, hyperlocal solutions are pushing the transition forward, too.

In this week’s news briefing: renewable energy has an undisputed leader, and anti-violence outreach workers help their at-risk clients shelter in place.

A lack of available land is the biggest obstacle to solar power’s expansion — or maybe it isn’t.