The Tantalizing Dream of a “Regional” Olympics

The Games have become an unwieldy, budget-busting affair. Allowing multiple cities — or even countries — to co-host could fix that.

Four years before Nagano, Japan was to host the 1998 Winter Olympics, journalist Ben Hills traveled to the site designated as the geographical center of the games. What he found there shocked him.

“There is not a piece of machinery in sight, not a sign, not even a fence marking the spot,” he wrote. How could this be the place where hundreds of thousands would converge for one of the world’s biggest sporting events?

The short answer is, it wasn’t. The Nagano Olympics were, in reality, a regional Olympics, in which many events were held in other cities more than 90 minutes away. It wasn’t the first time the games had spread out over a vast area. The 1992 Winter Olympics in Albertville, France took place across an area of about 650 square miles. Only two events, figure skating and speed skating, actually took place in Albertville, with the rest held at sites up to two hours away.

But these were unusual cases. Typically, the entire enterprise is crowded into one area, with perhaps a satellite location or two for events with topographical requirements, like skiing. This is the case with the 2022 Winter Olympics, which open this week in Beijing. The majority of events will be held in the city’s Chaoyang and Yanqing districts, with a few others (mostly skiing) in the bordering city of Zhangjiakou. It’s a massive undertaking for one city, albeit somewhat less so this year, with tight controls on spectators.

But the Games at Nagano and Albertville raise an intriguing question: Why not always make the Olympics a regional event? The Games have become such a cumbersome beast that many cities now dread their arrival, knowing they’ll result in huge debts and massive amounts of unneeded infrastructure. Why not disperse all that infrastructure — along with its imposing costs — across an array of co-hosting cities?

As it turns out, the idea has been floated before, most recently by former New York governor George Pataki, who wanted to bring the Winter Olympics back to Lake Placid in the early 2000s. Lake Placid has hosted the Games twice, most recently in 1980. But since then, the Olympics had been super-sized into a multi-billion-dollar spectacle — too heavy a lift for a small mountain village of 2,500 in upstate New York.

“The games have outgrown our tiny resort town in the last 34 years,” read a wistful editorial in the Adirondack Daily Enterprise. “Our 1980 event has been heralded as the last small-town Olympics.”

But Pataki and the town’s local boosters had an idea: What if Lake Placid could co-host the Games with another medium-sized city like Albany, more than 100 miles away? Even Montreal was floated as a potential partner, raising the tantalizing prospect of a trans-national Olympics. Unfortunately, the timing couldn’t have been worse. Canada was already focused on Vancouver’s upcoming 2010 Olympics, and New York City was busy shepherding a bid for the 2012 Games. Momentum sputtered, and the idea was abandoned.

Even after it fizzled, however, Governor Pataki expressed hope that a regional Olympics would someday take shape. “It’s down the road,” he promised. “We’ll have an excellent chance of doing it again.”

Taking the burden off a single city has obvious merits. Each subsequent Olympics grows bigger and more unwieldy than the last, leaving red ink, empty stadiums and exasperated locals in its wake. Three years after hosting the 2016 Games, Rio de Janeiro still owed $160 million to creditors, and efforts to repurpose the infrastructure had been met with mixed success. In Rio’s condo-converted Olympic Village, for instance, just 10 percent of the 3,600 units had found buyers, and a subway line constructed to connect sporting venues had been ridiculed as a train to nowhere.

This type of post-Olympics infrastructure glut is an unfortunate paradox, given that most cities really do need the kinds of infrastructure upgrades the Olympics can provide. Spreading the wealth between two or more cities could diffuse some of the impact of the Games, while also bestowing each location with infrastructure of a more reasonable, sustainable scale. It could also open up the process to smaller cities that rarely get that level of investment, and generate the kind of inter-city transit connections that would otherwise be tough to get off the ground.

Case in point: the bullet train that today carries 10 million yearly passengers from Tokyo to Nagano in 80 minutes was built for the 1998 Games. Albertville’s sprawling Olympics also resulted in a new train line connecting the host city to Paris. And little Pyeongchang, South Korea (population: 43,000) got a world-class high-speed rail connection to Seoul out of its 2018 Winter Games.

The more you think about it, the less outlandish the idea seems. Why not a Columbus-Cincinnati-Indianapolis Summer Games? Or a Winter Olympics co-hosted by Vienna, Budapest and Bratislava? What could better reflect the hands-across-the-world comity inherent to the Olympic brand than a joint effort designed to mutually benefit everyone involved?

In reality, the concept faces major hurdles. Nagano prepared diligently for the logistical challenge of hosting a major event spread out over hundreds of miles. Some 900 buses shuttled 60,000 athletes, officials and journalists from venue to venue, and even then, the low-speed, two-lane roads created significant traffic problems. In Albertville, some critics felt that the multi-city dynamic took away from the spirit of the games. Britain’s Daily Telegraph wrote that the sense of global conviviality “was lost on the wind. Competitors, from Switzerland to Senegal, complained about the lack of atmosphere.”

It’s also against the rules. As stipulated by the International Olympic Committee, a single city must be declared the host, even if the events themselves occur over a larger area. But at Albertville in 1992, Juan Antonio Samaranch, then-president of the IOC, told the Christian Science Monitor that he thought a truly regional Olympics would materialize someday. “We are envisioning the possibility of holding future games in several regions or even in more than one country,” he said, “but with one city given overall responsibility for the project.”

The Games beginning this week in Beijing will display some of this potential. As the sole host city, the Chinese capital is coordinating the entire event. But because Beijing proper doesn’t have room for all the large venues required, two neighboring areas are sharing the burden: Zhangjiakou, a city on Beijing’s southeastern flank that will host events like the biathlon, snowboarding and nordic skiing; and Yanqing district in northwestern Beijing that will host the bobsled, skeleton, luge and alpine skiing about 50 miles outside the city center.

It’s easy to imagine how a future Olympics could stretch even further — our world today is far more technologically linked than it was when Nagano hosted. Now, it’s perfectly normal for a Londoner to telecommute full-time to Mumbai, or for a college student in Lagos to attend classes remotely at a school in Tel Aviv. The Tokyo Games last year saw an explosion in digital spectatorship: some 28 billion video views, a 139 percent increase over the Rio Games just four years prior. As a sports reporter for the Times of London imagined it in Albertville, a regional Olympics is the next logical step, “a simultaneous but separate gathering of world championships, linked only by television.”

A version of this article originally appeared in Next City. 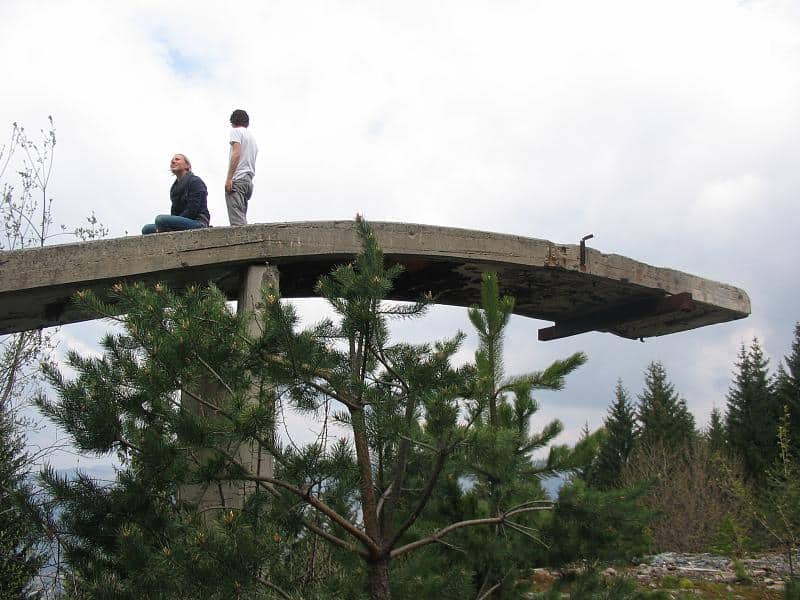 What happens to Olympics infrastructure after the Games leave town? NBC Sports has the post-apocalyptic photos.

Revisit the 1980 Games in Lake Placid, the “last small-town Olympics.”