Making the Business of Juneteenth Pay Off for Black America

Corporations are embracing Juneteenth. Are they living up to the day’s true meaning?

Reasons to be Cheerful is proud to partner with URL, a network of high-performing Black and Brown media outlets, to bring this content to you. Read them. Hear Them. Follow them. Support them.

Justin Moore went most of his life without knowing about Juneteenth. The general manager of Uncle Bobbie’s Coffee & Books, a Black-owned cafe and bookstore in Philadelphia, wants that to change for future generations.

The popular Germantown business is commemorating the day with an online and instore display of books about Juneteenth for children and adults.

“The fact that Black people live decades of their life not knowing about this significant event is an indictment on our education system,” Moore says.

Juneteenth, named by combining June and 19, marks the day in 1865 when federal troops descended on Galveston, Texas, with news that the enslaved were free. That was two-and-a-half years after President Abraham Lincoln’s Emancipation Proclamation on Jan 1, 1863. The day, also known as Freedom Day or Emancipation Day, is hailed by the Black community as a day when slavery ended throughout the nation.

The holiday expanded widely last year after George Floyd’s killing in Minneapolis, and the subsequent civil unrest on systemic racism, racial equity and justice. More cities, states and workplaces across the U.S. began to acknowledge Juneteenth as an annual holiday. Experts now caution that some of those efforts might ring hollow if they are not accompanied by a serious commitment to diversity and equity in boardrooms and C suites.

Pennsylvania was early to the trend. In 2019, a year before Floyd’s killing, Gov. Tom Wolfe designated June 19 as “Juneteenth National Freedom Day.”

In 2019, Philadelphia hosted what organizers say was the largest Juneteenth parade and celebration in the country with an estimated 25,000 attendees and more than 130 vendors. Organizers attribute the massive turnout to the change in the parade’s venue from downtown into the heart of the Black community in West Philly.

Philadelphia adopted it as a city holiday in 2020. This year, a host of other cities are joining in with their official recognition, including the city of Galveston, which has finally deemed Juneteenth an official holiday more than 150 years after the historic event. As of now, 45 states and Washington D.C. are commemorating Juneteenth as an official holiday. This week, President Biden raised its profile even further by signing legislation making Juneteenth a federal holiday.

Since June 19 falls on a Saturday this year, retailers such as JCPenney, Nike and Target are observing Friday as an annual holiday. JCPenney is also donating to Unity Unlimited Inc., a nonprofit organization started by 94-year-old activist Opal Lee, who has campaigned to make June 19 a national holiday.

Vanguard, the Valley Forge, Pennsylvania-based global investment giant, is creating space for its Black professional network group to host virtual events so employees can learn about the day’s significance and reflect on the contributions of the Black community.

“I am hoping this momentum is not a fad to satisfy an immediate need and that corporations and businesses truly continue to support and celebrate the day every year,” says Felicia Harris, owner of HiTouch Enterprise, a communications firm, and a marketing consultant for the Philadelphia Juneteenth Parade and Festival. “I hope they have money for Juneteenth forever allocated in their budget.”

This year, due to Covid restrictions, the parade was canceled but there will be a march down West Philadelphia’s main commercial corridor.

For the march, grocer Brown’s Shoprite is decorating all eight city stores in red, black and green and is providing bottled water and packed lunches for attendees. The company is also participating in two gun buyback programs with community partners in the city, offering a $100 store gift card for every gun turned in.

In the future, organizers believe the festival could make Philadelphia the epicenter of Juneteenth celebrations and more corporations and businesses would want in on the festival.

“It’s important for our (Black) children to learn about the history of Juneteenth and the resiliency and creativity of our people,” says Ali Salahuddin, festival co-founder and general manager. “Just like Mardi Gras’s home is in New Orleans and July 4th is associated with the birth of our nation, we hope to take our festival to the next level and make Philly the home of Juneteenth celebration in America.”

“I have mixed emotions,” Gravely says. “If we can make this moment matter and create change around it by checking on institutions and corporations on an annual basis, holding them accountable, and making it a day of cross cultural celebration of Black people, then we have an opportunity to do something. If not, I am not in.”

Like in Philadelphia, a number of celebrations are being planned in this Midwestern state, with corporations and banks sponsoring events. But Gravely says his company is not observing Juneteenth in any special way.

“In my organization, we wake up every day and we live every day working for diversity, equity and inclusion,” he says. “I am not clear who is pushing the Juneteenth agenda and who is benefiting from making it a holiday. If it’s us, cool. If not, then why does it matter?”

Leigh-Anne Francis, an associate professor with the Department of African American Studies and Department of Women’s and Gender Studies at The College of New Jersey, says corporate support of events such as Juneteenth, instead of uplifting, has the potential to weaken racial justice movements.

“These corporations are not so much interested in ending systemic racism and state violence against Black people,” Francis says. “The corporate-capitalist aim is to profit from racial justice movements. We must resist the urge to embrace corporate trends and the corporatization of racial justice.”

This month, the African American Chamber of Commerce of Pennsylvania, New Jersey and Delaware will host mayors from U.S. cities with a high density of Black population to discuss ways to increase Black-owned business and entrepreneurship, says Regina Hairston, president & CEO.

Kenneth Anderson, vice president of civic affairs at the Chamber of Commerce for Greater Philadelphia, says his organization has been launching initiatives to support investments in Black and Brown businesses. One of the programs, the Diverse Procurement Collaborative, launched in March, recruited 100 chamber members to increase their spending in minority-owned businesses in the next two years.

Participating companies will have to take a baseline assessment, institute equitable procurement practices and report their progress. Through the Philadelphia Skills Forward Initiative, launched last month, the Chamber has engaged more than 75 companies to hire, train and mentor at-risk workers, especially from Black and Brown communities.

“We are at a pivotal moment in the business community where we can make a difference by doing something rather than talking about it,” Anderson says.

Moore of Uncle Bobbie’s Coffee & Books says he hopes that as more people reflect on Juneteenth and how Black history has been marginalized over the years, there will be more tangible changes in society like the ones mentioned. This can’t become another day where you get 30 percent off on electronics, he says.

“Using hashtags and changing fonts doesn’t change anything if corporations don’t have Black executives in their boardrooms,” Moore says. “Let’s make this about empowering Black communities and ending the inequalities that enslaved us.” 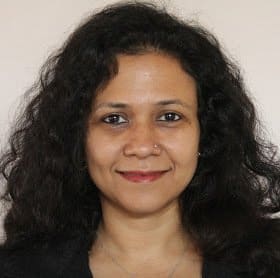 Madhusmita Bora (she/her) is a writer, teacher and an award-winning multidisciplinary artist. She has previously worked for The Philadelphia Inquirer, Indianapolis Star and St. Petersburg Times (now Tampa Bay Times). Her artistic endeavors have been supported by Leeway Foundation, Philadelphia Folklore Project, The Pennsylvania Council on the Arts and the Pew Center for the Arts & Heritage. She is an adjunct faculty at Lincoln University. Bora lives in the Germantown section of Philadelphia with her teen son, husband and numerous musical instruments. When she is not writing, singing or dancing, she is out exploring the Wissahickon and its treasures.

Public health and church officials have turned the shots into a Sunday ritual.