How Sweden Sends Just 1% of Its Trash to Landfills

The country incinerates nearly half its garbage to create the energy that powers its homes and buildings.

In the vast majority of countries, landfills are growing at an unsustainable rate. According to the International Solid Waste Association (ISWA), 40 percent of worldwide waste ends up in open, uncontrolled dumpsites. As many as 38 of the 50 largest landfills threaten to pollute the sea and coastal areas, while 64 million people are directly affected by them, often with severe health problems. Perhaps worst of all, landfills’ decomposing trash spews climate-altering methane into the atmosphere. “At the current rate, at least 10 percent of global greenhouse gas emissions will come from the world’s landfills by 2025,” reports the ISWA.

As the world seeks out ways to shrink its open mountains of garbage, Sweden, a country that sends less than one percent of its waste to landfills, offers an alternate path. Much of Sweden’s success in reducing landfill waste can be credited to its high recycling rates: between recycled solid waste and composted organic matter, Sweden recycles nearly half of what it throws away.

What it does with the other half is what sets Sweden apart from much of the world. Nearly all of Sweden’s non-recycled waste is burned to generate electricity and heat. It’s a method that, while emitting CO2, is far better for the climate than sending garbage to landfills, according to the Swedish government and proponents of waste-to-energy technology. “Energy recovery is the best available technology for treating and utilizing the energy in different residual wastes that can’t easily be recycled,” says Klas Svensson, a waste-to-energy technical advisor at Avfall Sverige, Sweden’s waste management association. “For many other countries in Europe, it represents an opportunity to both replace Russian gas, and at the same time phase out landfilling.” It also happens to earn Sweden a good deal of money.

Sweden was an early adopter of waste-to-energy. Its first plant started operating amid a post-war home-building boom in the late 1940s. The new houses were connected to district heating networks, which generate heat at a central location and pump it out to individual homes, rather than each house having its own boiler.  Over the years, more of the energy powering these district heating networks was supplied by waste-to-energy power plants, with major expansions beginning in the 1970s. Today, Sweden has 34 waste-to-energy plants supplying 1,445,000 households with heat and 780,000 households with electricity — impressive figures for a country with a population of only 10 million.

One of the largest of these power plants is called Sysav. It is among the most efficient plants in the country, burning around 600,000 tons of waste annually, enough to cover 60 percent of the heat requirements of Malmö, a city of 300,000 inhabitants. Yet overall, waste-to-energy plants provide a relatively small proportion of Sweden’s power, over 80 percent of which comes from a combination of hydro and nuclear energy. Their main benefit is keeping trash out of landfills. In many countries, such as the U.S., landfills are one of the largest sources of methane, a greenhouse gas that is far more toxic to the climate than carbon dioxide. Over a 20 year period, methane is at least 84 times more potent than CO2 at trapping heat in the atmosphere, according to the UN Economic Commission for Europe.

This is why waste-to-energy advocates argue that, despite their CO2 emissions, such plants are far less harmful than methane-oozing landfills, and why the rest of the EU, which sends 24 percent of its waste to landfills, should adopt the Swedish model.

To some degree, they have. There are 492 waste-to-energy power plants across Europe, burning 96 million tons of waste annually to supply almost 20 million people with electricity. Probably the best-known is not in Sweden, but a few kilometers from the Swedish border in neighboring Denmark. The Amager Bakke waste-to-energy plant on the outskirts of Copenhagen — which aims to become the world’s first zero-emissions city by 2025 — has received international attention for a ski slope made of green plastic that descends from its roof, plus a climbing wall, a park, a café and an environmental education center. The plant collects waste from 600,000 inhabitants and 68,000 companies, burning it to produce steam, which drives turbines to generate electricity or is fed directly into Copenhagen’s district heating network.

Some 10 percent of the energy provided to European district heating networks comes from waste-to-energy plants. Ireland, Lithuania, Poland, Spain, the UK and Denmark have all recently opened new ones. At the same time, older ones have been modernized. “Some of the older plants have been embarking on interesting innovative projects of CO2 capture and storage/use, hydrogen production, or energy efficiency,” says Agne Razgaityte of the Confederation of European Waste-to-Energy (CEWEP).

In Wuppertal, Germany, for example, in a region formerly dominated by the steel and coal industries, the district heating network was connected to a waste-to-energy plant in 2018. This replaced heat that had previously come from a coal-fired power plant, now decommissioned, in the Wupper Valley. Moreover, the Wuppertal municipal utility recently began operating a hydrogen filling station for 20 local public buses using electricity from the waste-to-energy power plant.

Not everyone in Europe sees waste-to-energy power plants as a good thing, however. “We believe that the current system for dealing with residuals, i.e. waste-to-energy incineration, is outdated and broken,” says Janek Vahk from the NGO Zero Waste Europe. “Waste-to-energy prevents proper recycling and makes climate change worse.” Vahk is also skeptical about the plants’ safety. “Our recent report found high levels of persistent organic pollutants like dioxins or furans around waste incinerators in three countries.”

To mitigate some of their worst effects, since the mid 1980s Sweden has developed increasingly stringent standards to reduce power plant emissions, and is working on CO2 capture and storage at waste-to-energy plants. In addition, Sweden follows the European Union’s prioritization of waste prevention, reuse and recycling — in that order — with advanced waste separation, a dedicated tax on single-use products and repair services at waste centers. The country has brought its share of recycled municipal waste to 37 percent. And by 2025, food and residual waste is expected to be just one quarter of what it was in 2015. (Ironically, thanks to efforts like these, Sweden has less waste to burn these days, and for this reason, waste-to-energy output has fallen by eight percent.)

The country still has more to do to increase its recycling rates in order to hit the EU’s recycling target of 65 percent by 2035. Nevertheless, Klas Svensson of Avfall Sverige is sure that waste-to-energy “will be a necessary part of Swedish waste management for years to come.” Used diapers, hospital waste or packaging made from composites will not be recycled anytime soon. Even items made from recycled materials end up in the trash sooner or later. And some materials, like paper, can only be recycled a limited number of times.

In fact, Sweden has already run short on trash to fill its own waste-to-energy plants, so other European countries now pay Sweden to take their garbage and burn it — 1.9 million tons per year, which Sweden uses to keep its houses warm and brightly lit, while raking in $100 million a year for the privilege.

This hints at the fact that, at some point in the future, if Europe’s waste-reduction and recycling strategies pan out, there will probably be fewer waste-to-energy power plants. There simply won’t be enough trash to keep them all running. And that would be good news, too. Except for fans of year-round green plastic ski slopes, like the one at Amager Bakke power station. 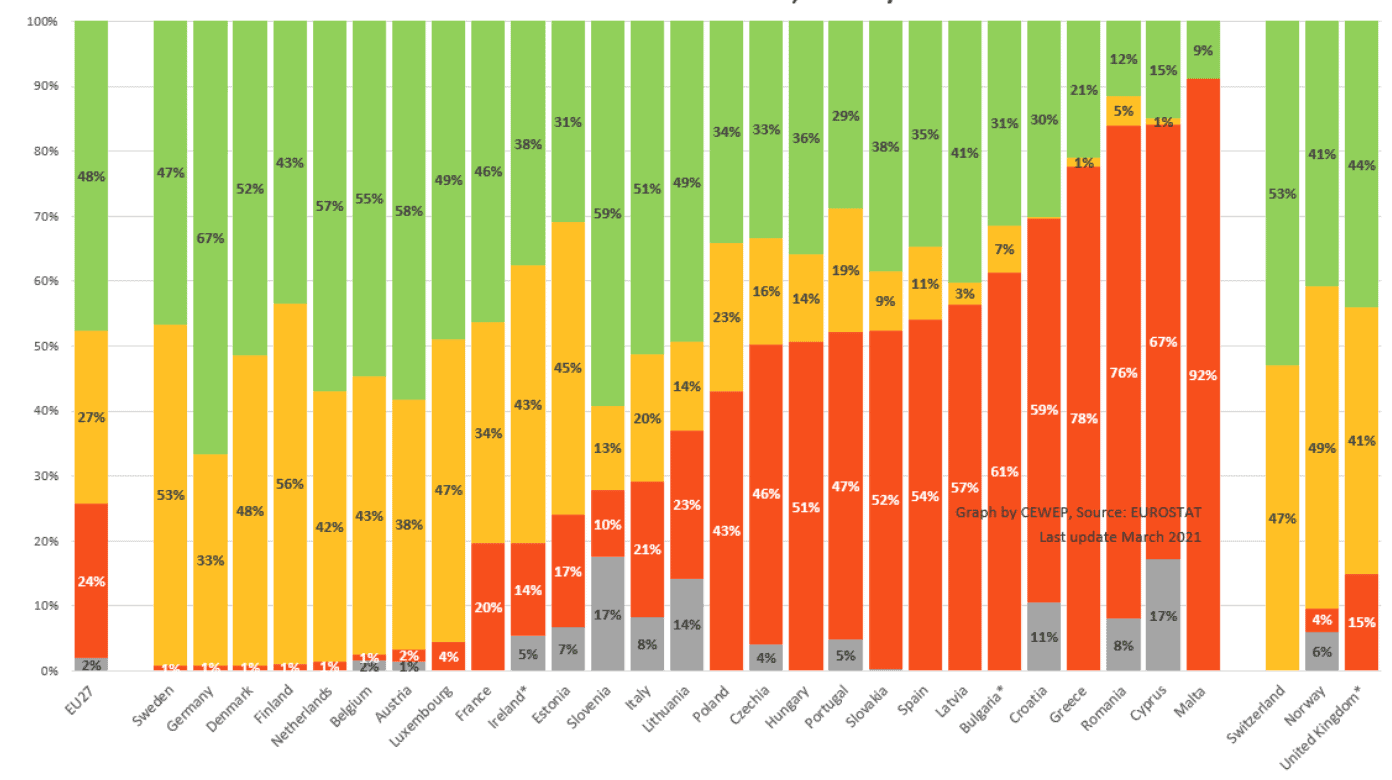 See how every country in Europe measures up when it comes to their waste-to-energy mix.

Want to see what it’s like to ski down the side of a power plant?

Klaus Sieg writes about agriculture and food, the environment, energy, the economy and social issues. He is based in Hamburg.