A Diet Rich in Probiotics Could Climate-Proof Coral Reefs

New research shows that the “gut health” microorganisms can enhance the immune systems of living coral.

When Raquel Peixoto goes to work in the Red Sea, she snorkels across “Nemo Street,” dives down to “Octopus Land” or swims to “Dolphin Lane,” where she is certain to encounter at least one dolphin family. “The dolphins are the guards of the coral village,” the marine scientist half-jokes. “We named each area of the coral probiotics village after the organisms that live there.”

Half an hour from this underwater village is her other workplace, the labs and water tanks at KAUST, the King Abdullah University of Science and Technology in Saudi Arabia. Here, Peixoto studies how to keep the occupants of Nemo Street and Octopus Land alive. She has found early success with a method that sounds both familiar and novel: probiotics for corals.

Probiotics, that staple of yogurt ads and supermarket supplement aisles, have taken off in recent years as a way to enhance gut health and the immune system. But Peixoto, a 45-year-old Brazilian microbiologist, is the first to prove that “inoculating” corals with probiotics can make them more resilient to environmental threats.

“We have tested them for heat stress, pathogens and oil spills,” Peixoto says. In the lab, the probiotics treatment increases coral survival rates by 40 percent. “We can observe the restructuring of the microbiome of these corals and they are responding better to stress,” she reports. “This is very reassuring and motivating because we know it’s possible. Now we need to crack the code on how to do that in the field.”

Last fall, Peixoto began to do just that, launching her first experiments in open water. She and her team lathered sections of a reef with a carefully curated cocktail of beneficial microorganisms. “We selected this reef because it’s surrounded by a reef wall and is kind of its own ecosystem,” Peixoto says. “It’s a tightly controlled experiment. We know every inch of the reef and monitor it very closely.” In the future, once the method is established, robots could take over the task of applying the probiotics, or patches (similar to nicotine patches for humans) could deliver the medicine over a period of several weeks.

The stakes are enormous, and time is of the essence. The planet has lost half of its coral reefs over the last 50 years, and 90 percent have bleached at least once, leaving them more susceptible to stress and death. “We’re running out of time,” Peixoto says. “Corals are the basis of the ecosystem in the oceans.” Though they cover only 0.1 percent of the ocean floor, 34 percent of known marine species depend on coral reefs. They are nurseries for tuna, habitats for octopuses and feeding grounds for butterfly fish. “And that’s just the marine species we know about,” she adds. “There are so many more we don’t even know yet.” In addition, corals protect coasts against waves and storm surges. “Coral reefs dissipate or minimize about 90 percent of the height and energy of waves, and they also play a role in the regulation of the local climate,” Peixoto says. “We only know the proverbial tip of the iceberg.” 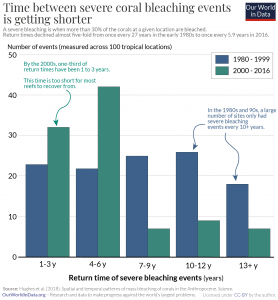 Some of the corals in the Red Sea coral village have already bleached, and part of Peixoto’s research lies in figuring out which coral species respond best to treatment and when to apply it. Just like in humans, her initial findings suggest that the probiotics work best as preventative care, when the damage has not progressed too far. “There is a tipping point when the corals are beyond saving,” she says. “We have a closing window of opportunities to protect coral reefs.”

Corals are actually surprisingly adaptive to short-term heat waves, but vulnerable to the global rise in temperature, as well as threats like ocean acidification and pollution. Peixoto returned from the climate change conference COP26 last November only somewhat optimistic. “At least we kept the 1.5-degree warming goal,” Peixoto says with a sigh. This is crucial: 10 to 30 percent of corals worldwide are estimated to survive if the global temperature rises by 1.5 degrees. That would open the chance for the corals to regenerate. However, if the temperature rises by two degrees, 99 percent of corals are almost certain to die. “If we don’t manage to stick to 1.5 degrees Celsius warming, most of the corals will be gone. This is a fact,” Peixoto says firmly. “It is no longer something that is under discussion. We need a serious commitment right now.”

Growing up in Rio de Janeiro, Peixoto went to the beach with her sister and her parents nearly every day. She fell in love with coral reefs when snorkeling near the northeastern Brazilian state of Bahia as a child. Raquel remembers the reefs as “magnificent, truly mesmerizing ecosystems.” But over the years, she watched the colorful underwater world degenerate into a skeletal, lifeless realm. “Coral bleaching happens when the photosynthetic algae that live within the corals and help nourish them, leave,” Peixoto explains. Just as it does in sick animals and humans, the microbiome gets out of whack.

During her early years as a soil and plant researcher in Brazil, Peixoto worked on developing oil-sucking bacteria to clean up oil spills in Brazilian mangrove forests. After seeing bacteria help to regrow and revitalize the mangroves, Peixoto began experimenting with bacterial reinforcements for other species, especially corals. “I began to think that I could use the same concept to not only target the contaminant, petroleum, but make the host healthier so they could resist stress and pathogens. Microbes rule the world.”

It is not without irony that Saudi Arabia, a state that became rich by selling oil, is now pioneering important research into saving the environment. But KAUST’s geographic location is no coincidence — the Red Sea reaches summer temperatures of up to 90 degrees Fahrenheit, a temperature that kills most corals. However, some Red Sea corals seem to adapt and survive these heat waves. “There are regions where the reefs are more sensitive, and they will likely disappear,” Peixoto says. “The unique aspect of these Red Sea corals is that they are more resilient and host the most powerful probiotics.”

She believes in this solution so fervently that she founded the Beneficial Microbes for Marine Organisms network (BMMO), a global cohort of researchers pursuing the most promising methods to protect reefs. She is also the co-chair of the Coral Conservation Committee with the International Coral Reef Society. Peixoto works with scientists worldwide to identify the most vulnerable reefs and the best ways to protect them. Different reefs have different needs, and probiotic mixes will depend on the local native species and conditions. Her research has won several awards, including the People’s Choice Award for the Great Barrier Reef Foundation’s Out of the Blue Box Innovation Challenge.

A 2020 study surveyed 360 coral restoration projects in 56 countries. Novel efforts include insurance policies designed to protect precious ecosystems, robots spraying baby corals in the Great Barrier Reef, and marine biologists in the Bahamas breeding healthy coral on land before transplanting it back onto ailing reefs. Peixoto cooperates closely with ecological genomicist Christian Voolstra at the German University of Konstanz who happens to be visiting KAUST when we speak. He has developed a tool for on-site stress testing of corals and focuses on fortifying heat-resistant corals through genetic modification. “All the solutions are needed,” Peixoto says. “We need all hands on deck. In the end, we will need every scientific approach that can be used, depending on the status of the reef, the local conditions and so forth.”

Though she’s not opposed to genetic modification, Peixoto emphasizes that her method is entirely natural and does not require it. She harvests bacteria from healthy corals, breeds them in the lab and transplants them back, just like you would protect young saplings of trees before replanting them in the forest. Asked about her prognosis for the future of the reefs, she takes a pause. “I have my ups and downs,” she finally says. “Because it depends on the decisions that will be made. It is possible to retain parts of the reefs if we do three things: We need to stop global warming, control the local pollution and we need to develop these active restoration tools. We need to be very bold.”

Her love for the ocean has become a family affair. Her husband is a researcher at KAUST, too, and her oldest son, who is 24, is about to earn his masters degree in marine biology. For family vacations, they usually go diving or surfing. “What do you do professionally? Diving! What do you do on the weekend? Diving!” the mother of three says with a laugh before becoming serious again. “I really want my children and my grandchildren to live in a world with coral reefs.” 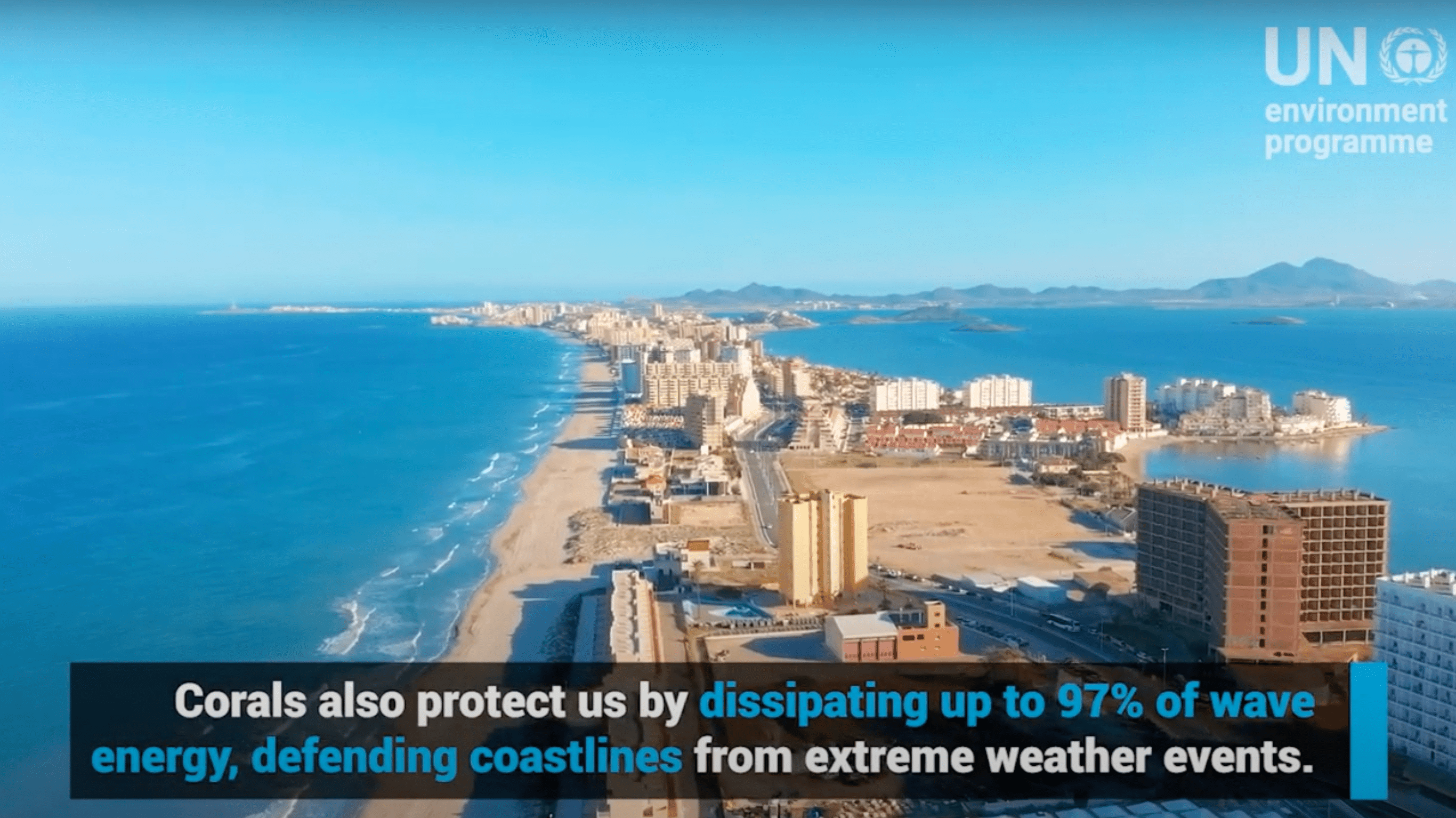 View the status of the world’s coral reefs at a glance.

Scuba Tours Are Planting Coral Instead

In this week’s briefing: Australian tour operators repair the Great Barrier Reef and a city keeps its restaurants afloat by hiring them to cook for the homeless.

This Is the First Ecosystem With Its Own Insurance Policy

A 100-mile stretch of coral reef in Mexico is now insured just like any other valuable asset. Is this the future of conservation?