When Giuseppe Alfarano left Camini, his hometown in southern Italy, he became part of an exodus that had been in progress since the 1950s. The young man moved to Florence to attend university, and during those years felt a knife to his heart — the pain and guilt familiar to many Italians who depart from the impoverished south each year. Calabria — the region that forms the toe of Italy’s “boot,” where Camini is located — has lost almost 65,000 residents since the last census in 2011.

Years after settling in Florence and starting a family, Alfarano got a job opportunity in Camini and returned to his original home. He found a diaspora that had grown as critical as a deadly wound. The small, rural village was down to 300 residents, and many houses in the historic center had been empty and abandoned for years. There were no bars, no restaurants, no schools, no cash machines and barely any internet connection.

“Whenever an elderly man or woman died, a neighborhood of the village also died,” recalls Alfarano, who today is the mayor of Camini.

With his friend Rosario Zurzolo, Alfarano founded a cooperative that began restoring the abandoned homes. Then, in 2011, a consequential decision set the town on its path to revival: Camini would fashion itself as a hub for resettling refugees.

The cooperative, now led by Zurzolo and funded by Italy’s ministry of the interior, organized a systematic approach to attracting refugees to the village. The new arrivals were given accommodation in the refurbished homes. They were offered free classes in Italian language, ceramics, carpentry, and Italian and Syrian cuisine, to name a few. And in the vineyards and olive groves that had been abandoned by the Italians who fled, the refugees learned how to produce the region’s famous olive oils and wines.

The revitalized town has since become a destination for curious travelers, and Camini’s newly restored homes are now marketed to tourists for conferences, yoga retreats and volunteering excursions. “Hospitality for us is like a mission,” Zurzolo says when asked about the origins of the resettlement project. The goal was not merely to resettle migrants, but to bring new life to Camini.

Now, with the arrival of families from Syria, Nigeria, Libya, Iraq, Pakistan and many other countries, the cooperative continues to expand. It recently opened an after-school club for the kids, a nursery school, a teaching farm, a restaurant and a bar. Operating these facilities doubles as job training for the newcomers who help run them. Even some Italians are returning to the village — in the last three years, the town saw more than 20 new births, and as of 2019 the population had risen to 726. The old primary school, which had closed, has reopened and doubled its number of classrooms.

Today the cooperative employs 40 locals and has many different projects. One of those is “Ama-la,” in which women refugees learn traditional weaving techniques from the Calabrian masters.

“The [weaving] frame has this enveloping structure that gives it a rhythm where you can unravel the threads and knot them again,” says Serena Tallarico, a psychologist and medical anthropologist. Tallarico launched the weaving project to help the participating refugees, many of whom had experienced war and trauma, build resilience. The rhythm of the weaving frame, she says, is one of interruption and fracture — typical of traumatic experience. In other words, she says, they are weaving their way out of their traumas.

Amal, one the Syrian refugees participating in the workshop, already harbored a passion for needlecraft back in Damascus. In 2016 she and her family arrived in Italy from Beirut through a humanitarian corridor. In Camini they found peace and stability. Amal’s daughter, Douaa, 20, works as an assistant project manager at the workshop, hoping one day to make the activity completely sustainable. “I remember everything of the war and I only see a future here in Italy now,” she says. “The pain is always with us, but we feel very blessed to be here in Camini.”

Alfarano, who became mayor in 2016, is happy to have them. He becomes emotional when talking about it. “Now when you walk in the streets at noon you can smell the scent of lunch or meet the kids playing and shouting,” he says. “The town is alive.” 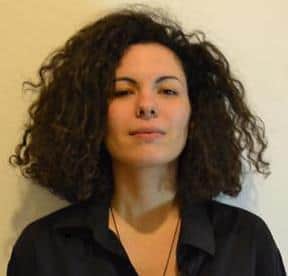 Alessia Melchiorre is a 2019 M.A. journalism graduate at the University of Groningen and an Italian Journalism Prize Roberto Morrione finalist. She worked at Associated Press in Rome and at Rai Radio 3. She co-produced a documentary about Calabrian Mafia's flower business in the Netherlands.

The Country That Invites New Immigrants to Dinner

To fight xenophobia, nearly 2,000 families have shared a meal. Many have come back for more.