Wherever you find advocates for saner transportation, their dream scenario usually hinges on the same outcome: making cities blissfully free of cars.

To this end, the Spanish city of Pontevedra, population 84,000, has done something remarkable: it has reduced car use in its historic core by 90 percent, and citywide by half. And it has done it without blanket fees or bans, instead using clever engineering and some gentle nudging to get people out of their cars and onto the street.

Pontevedra proves that you don’t need the economic clout of London, the regulatory zeal of Singapore or the political moxie of Copenhagen to reduce driving to functional zero. “In effect, these are everyday public works that have been carried out in the context of a global project, but they cost the same or even less,” says Mayor Miguel Anxo Fernández Lores. For cities that want to tap the brakes on car usage, Pontevedra offers a masterclass in tactical de-vehicularization.

Some cities decrease car use by levying a fee on driving or prohibiting car use on certain days—good solutions, but not necessarily feasible everywhere. Pontevedra, for instance, was run by a politically conservative government for decades before Lores, a member of the leftist Galician Nationalist Bloc, came to power in 1999.

Lores wanted to reduce driving, but because of the city’s conservative lean he smartly deduced that he should go about it incrementally. So, for instance, when he implemented parking restrictions, they initially included exemptions for local businesses, which were eventually phased out. “We’ve haven’t undertaken grand projects,” Lores told the Guardian. “We’ve done what was within our grasp.”

In the photo below, pull the scroll bar back and forth to see how Pontevedra’s car restrictions changed just one of its many plazas.

This measured approach has worked like a charm. Now that central Pontevedra is mostly car-free, a majority of residents like their city’s transformation, regardless of their politics. “Some people can’t stand you ideologically, but value that you’re doing things well,” Lores told the magazine Citiscope. The proof is in the ballot box: Lores was recently elected to a fifth term in office.

The sheer number of liberties Pontevedra has taken with its streets is exhilarating. For instance, many streets are designed as loops, making it impossible to use them to drive from one end of the city to the other. This solved a major problem—before the redesign, some streets were choked with nearly 30,000 cars a day, most of them simply passing through. Now, Lores told Citiscope, “If you enter by the south, you leave by the south.”

Pontevedra didn’t eliminate parking. In fact, in some places, parking is actually free—but only for 15 minutes. This ensures quick pickups and drop-offs by taxis and delivery trucks. And because most streets are a single lane wide, there’s simply nowhere for those trucks and taxis to double park, forcing them to use the limited number of designated pull-off spaces for their stops.

Calls for car-free cities can sometimes sound like a call to end driving entirely—a lovely fantasy, but one that’s unlikely to materialize anytime soon. With that in mind, Pontevedra does something controversial: it provides over 1,600 free parking spaces along its perimeter so that drivers can leave their cars there and enter without them.

Some drivers have complained that this causes traffic jams at the city’s edge. And the very concept of providing 1,600 free parking spaces (wherever they may be) is anathema to many urbanists. Still, the tactic has helped to keep cars off of Pontevedra’s streets, and since the entire city is small enough to be traversed on foot in 25 minutes, most visitors simply walk right in.

Lesson #5: Put Pedestrians in the Street

In some parts of the city, Pontevedra has taken the counterintuitive step of removing sidewalks entirely. The message is clear: the street is for pedestrians first, and cars should maneuver accordingly. In other places, sidewalks are wide enough for two people holding umbrellas to pass each other comfortably, a welcome feature in a place that gets over 75 inches of rain per year. Crosswalks are elevated to sidewalk level so as to be seen as definitively pedestrian spaces. All of these measures promote the primary message: this is a city where cars are a non-native species.

One of the more delightful elements of Pontevedra’s pedestrian-oriented streetscape is the Metrominuto map, designed like a subway map, with lines and transfer points, but for walking instead. It tells you how to get anywhere in the city by foot, as well as the distance—in meters and minutes—it takes to get there. The map won the 2013 Intermodes Prize and has since been copied by other European cities. 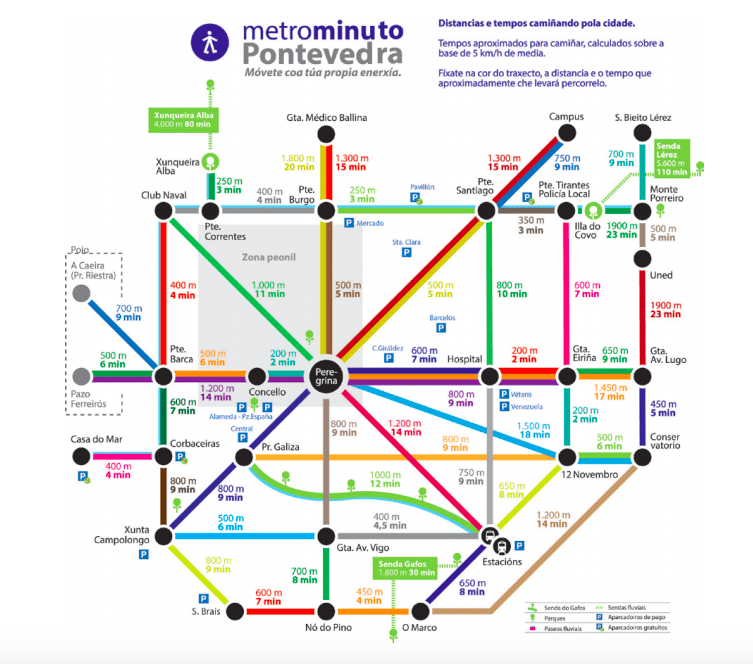 Often, local businesses are seen as the opposition to anti-car efforts. But in smaller cities like Pontevedra, where face-to-face engagement is possible, you can get them on your side. “They had to go shop-to-shop explaining their plan and negotiating the circumstances,” the director of a local business association in Pontevedra explained of the city’s process, which was ultimately embraced by the group.

At the same time, however, it’s important not to mistake the vocal opposition of a passionate few for true unpopularity. “There’s a theory that says the commercial sector always opposes these kind of things. We argue that this is not true,” Lores told Citiscope. “There can be opposition from a few people, but normally it’s for personal or political interests.”

Even initially unpopular plans to get cars out of cities are often embraced once they’re implemented. That’s certainly been the case in Pontevedra, something Lores isn’t shy about discussing.

“The historical center was dead,” Lores told the Guardian. “There were a lot of drugs, it was full of cars—it was a marginal zone. It was a city in decline, polluted, and there were a lot of traffic accidents. It was stagnant. Most people who had a chance to leave did so.”

Now, families with children are flocking to Pontevedra. Even as Spain struggles with a low birth rate, the child population of Pontevedra has increased by eight percent since car-removal efforts began 20 years ago. Overall, the city grew by nearly 10,000 residents in that time frame, making it the fastest growing city in the region of Galicia, according to Citylab.

Citylab also reports that crime rates are the lowest they’ve been in a decade. And according to the mobility publication In Movement, greenhouse gas emissions in Pontevedra have fallen by 70 percent. That’s half a ton fewer carbon emissions per citizen since cars were given the heave-ho.

All of this was accomplished without elaborate congestion pricing or a “war on cars,” which likely would have faltered due to Pontevedra’s particular circumstances. Instead, the city designed a system that worked for its own situation, with minimal disruption. As Lores told Citiscope, “You only need a small amount of cars to make a city work.”

Read this article’s companion story, Cars in Cities: How’s That Working Out?