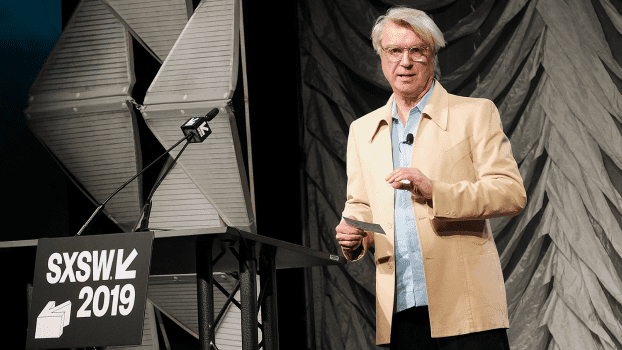 David Byrne Details Reasons to be Cheerful at SXSW

David Byrne came to South By Southwest on Wednesday (March 13) to talk about his Reasons To Be Cheerful project and, in the evening, to screen and answer questions about his 1986 film True Stories. But a little musical discussion was probably inevitable during his 55-minute early afternoon keynote session.

The first of the digitally submitted questions, in fact, asked Byrne to weigh in on the current economies of the music industry – which T Bone Burnett focused a great deal of his time on during his talk in the same Hilton Hotel ballroom just before Byrne spoke. “Yes, things are changing very rapidly,” he told the overflow crowd. “In some ways what we as musicians do feels like it’s been devalued over the years. It’s become kind of free wallpaper or whatever.” Byrne then noted that his personal antidote has been playing live.

“I find that for me, at least, performance is still a thing that I do fairly often,” Bryne said. “That experience as an audience or as a performer lives outside the commodification of music. That, to me, is a good sign. There’s an opportunity for things to be heard beyond the gatekeepers.” Byrne added that the changes in the music business have not really changed his creative practice, either. “I just kind of find other kinds of media, whether it’s film or (Reasons To Be Cheerful),” he said. “I have been lucky enough to make enough money from touring – not so much from records anymore, but from touring – that I have the luxury of being able to say, ‘Oh, I want to do this’ and can dedicate my time and pay people to collaborate with me on things. That’s not that different than what I used to do.”

These days, however, Byrne says he’s become more patient. “My process is usually to let things emerge by themselves – just start doing something and see what happens and be quiet about it until its identity seems to emerge and has shown itself,” he explained.

That’s certainly true of Reasons To Be Cheerful, which Byrne launched as a response to the current state of division and divisiveness in America and other parts of the world – through his own investigations as well as through musical projects such as his 2018 album American Utopia and the widely acclaimed tour that supported it. During the bulk of his keynote talk Byrne spoke in depth about positive initiatives around the world in climate, education, prison reform, culture, education and other areas, citing specific examples and showing their results – including reduction in crime rates, increases in employment and test scores – with charts and graphs. He even offered praise for Dale Ross, the Republican mayor of nearby Georgetown, Texas, for steering his town towards renewable energy and spoke about his ongoing collaboration with the Detroit School of the Arts, whose students are collaborating with Byrne on musical, dance and visual interpretations of his songs.

Reasons To Be Cheerful is still very much a work in progress, according to Byrne, who hopes to do some fundraising and bring in additional personnel to help him expand the organization into a more visible public concern. “I want to keep doing it for my own sanity,” Byrne explained. “I’m trying to evolve a structure to make it be a continuing thing for my health and, I think, the health of other people to enjoy and be inspired by these kinds of things. I would like to think I’m finding something, some bits of hope that it is not as bad as it often seems. If I didn’t do that, I would be really depressed – as a lot of people are around the country. We need these things to show us that we are not as bad as we are portrayed, or as we look at ourselves in the media mirror. We have possibilities. We can do things. It’s an ongoing project.”