A Bridge Will Help Humans and Lions Coexist in Los Angeles

As the only major Western city that is home to lions, L.A. is breaking new ground in infrastructure designed for big wildlife.

Hollywood’s loneliest bachelor just shocked another unsuspecting woman by leaping over her fence in Beachwood Canyon at the cusp of dawn and then leisurely checking out her barbecue for leftovers. Leilani Fideler’s security camera caught him as he gracefully crouched atop her gate, his yellow eyes and well-defined chest muscles shining in the floodlights before he disappeared back into the dark.

“Look how gorgeous he is!” raves Beth Pratt, the California Director of the nonprofit National Wildlife Federation. “I would award him an Olympic score of ten for the balancing act on the fence. He’s aged so well!”

P-22 is a muscular alpha-male mountain lion. He is such a perfect specimen that Pratt nicknamed him “the Brad Pitt of the cat world” and tattooed his face on her left arm. The honey-colored cougar has been living alone for the last ten years in Griffith Park in Los Angeles, within sight of the Hollywood sign, but isolated from potential dating partners by the buzzing 405 and 101 freeways. “He must have made that trek across two major freeways, a feat no other cougar has accomplished,” says Pratt.

Soon, however, that death-defying stunt will no longer be necessary. For his upcoming 12th birthday, P-22 will receive an eye-popping gift: the biggest wildlife overpass in the world.

In the U.S., over a thousand wildlife crossings help animals navigate the human-built world, allowing them to bypass hazardous infrastructure like highways, train tracks and aqueducts. But less than two dozen of these are overpasses, and most are in fairly rural areas. L.A.’s will be a groundbreaking test case: a wildlife crossing designed to help big cats thrive in an urban environment.

Scheduled to begin construction this spring, the Wallis Annenberg Wildlife Crossing will traverse the 101 Freeway at Liberty Canyon just west of Los Angeles. At a whopping $88 million, it’s a costly bridge. But advocates say it’s absolutely necessary to maintain the unusual habitat that is Los Angeles, a city where large wild animals and people coexist in close proximity.

Los Angeles is the only major city in the Western hemisphere that is home to lions. (The only other metropolis with big cats is Mumbai). Thousands of hikers trek through Griffith Park every year, unaware that a nearby puma might be watching them. In theory, the roughly 160,000 acres of the Santa Monica Mountains National Recreation Area make an ideal big cat habitat. The world’s largest urban wilderness stretches from the Hollywood Hills all the way to the Pacific coast in Malibu. Yet the terrain is divided by four freeways — lethal barriers for wildlife — and hemmed in by the ocean to the west, the 101 to the north and east, and urban sprawl in multiple directions.

About a dozen mountain lions currently live in the Santa Monica Mountains, and each year a few are killed by cars or in territorial clashes with each other sparked by the crowded quarters. Inbreeding is also a growing problem — already, some newborns show deformities such as kinked tails, and a recent study discovered that 93 percent of the males’ sperm is abnormal. “Fights, cars and rodenticides are the main causes of death for the mountain lions,” Pratt says. Without the wildlife overpass, mountain lions in Los Angeles are predicted to be locally extinct by 2050.

P-22 is the only cougar that has managed to breach the city’s freeways and roam even further into the heart of L.A. This distinction has made him an emblem of Angelenos’ coexistence with wildlife, as well as a model of animal resilience despite the urban sprawl encroaching into his natural habitat. Because he has not dared to cross the 101 again, he now occupies the smallest territory ever recorded for a mountain lion, a mere nine square miles in Griffith Park. “Can’t we all relate to being stuck in traffic on date night?” Pratt asks. Thousands attend the “P-22 Day” Pratt organizes every year, along with the popular 47-mile “P-22 trek” that follows the route the big cat has likely taken.

California is the only U.S. state in which hunting mountain lions is illegal due to a ballot measure William Newsom, the current governor’s father, championed more than 30 years ago. And most Angelenos are surprisingly tolerant — even fond — of the predators. Occasionally, P-22 ventures into somebody’s yard and mistakes a poodle for a meal; in 2016 he sneaked into the L.A. Zoo and dismembered a koala. Yet, the city refuses to issue a kill permit. In fact, after P-22 nearly died of mange after ingesting rodenticide in 2014, the city banned rodent poisons for homeowners. A few years ago, when a Malibu resident did manage to get a shooting permit after a different mountain lion killed several alpacas, thousands of locals demonstrated in support of the lions.

Even those who don’t fancy a chance encounter with a 120-pound predator could consider the advantages of offering one a helping hand over the freeway. Building a cougar bridge for $88 million sounds outrageous until one considers that in the last three years, an average of 20 large-animal crashes per day in California have cost the state more than $1 billion. Many of these could be avoided. Wildlife crossings have reduced fatal deer collisions by 98.5 percent in Utah and nearly 90 percent in Colorado. “The project is pretty close to having paid for itself already by reducing collisions with deer,” says Fraser Shilling, co-director of the Road Ecology Center at UC-Davis.

Apex predators like pumas also act as “ecological brokers,” a recent study found, and play “an outsize role” for the health and biodiversity of their territories. These considerations were what compelled the California Wildlife Conservation Board to allocate nearly $25 million for the bridge. The Annenberg Foundation donated another $25 million, and the foundations of Leonardo DiCaprio and others gave several hundred thousand dollars each. Perhaps speaking to the big cat’s charisma, more than 5,000 donors around the world added sums big and small, including children sending their pocket money. “A boy in Arkansas just asked for a P-22 themed birthday party,” Pratt says. “In Arkansas!”

Pratt has visited most major wildlife crossings in other states to understand the considerable challenges. “Nobody has ever tried to put a wildlife crossing over such a busy freeway,” she admits. “We’re talking light and noise pollution. Compare that with the overpass in Utah that gets up to 14,000 cars a day versus 300,000 to 350,000 in Los Angeles.” To blunt this urban chaos, the overpass will look less like a bridge and more like a 165-foot-wide parkway lushly adorned with carefully selected native plants and trees.

How will the animals know where to go? “We’ll put up a sign: ‘Wildlife crossing this way!’” Pratt jokes before turning serious. “First of all, animals don’t want to cross our roads, and they will look for any other way.” Exclusionary fencing, slopes and vegetative cues will help guide them, and effectively mimic an ecosystem with local flora, soil and fungi bred in a special nursery. “Liberty Canyon is a natural funnel; it narrows the options down to the last 1,500 feet,” Pratt says. From studying GPS-collared mountain lions, she has learned that “they naturally come down there and then turn around because they can’t get across.”

While P-22 might be the most prominent face of the #SaveLACougars campaign, he’s not the only one who could use the new bridge. “The entire Santa Monica Mountain ecosystem has been cut off,” Pratt says. “We’re seeing genetic diversity diminishing across all flora and fauna.” Coyotes, rabbits, and even toads, birds and butterflies will benefit from the bridge. “For a bird, ten lanes are pretty daunting to cross. Research shows that they change their flight paths to fly over vegetation,” Pratt says. “You might not think of butterflies, but butterflies are getting slaughtered on the 101; your windshield gets splattered.” To her, the bridge is “about alleviating suffering for the animals. They suffer, all of them, not just the mountain lions.”

Construction is projected to finish by 2025, and already P-22’s fans are posting pictures of eligible female lions on his social media accounts, asking, “Is she your type?” Pratt compares him to “James Dean, a rebel in unknown territory. He will never have a girlfriend as long as he can’t cross the freeway.” Watts hip-hop artist Warren even wrote a P-22 song titled “On the Move Again.”

Alas, the new bridge might come too late for him. In the wild, mountain lions rarely live beyond 15 years. But Pratt is reassuring.“His bachelorhood is not in vain. It will ensure the future of his species. He has no idea that his lovelorn existence has inspired this entire movement.” 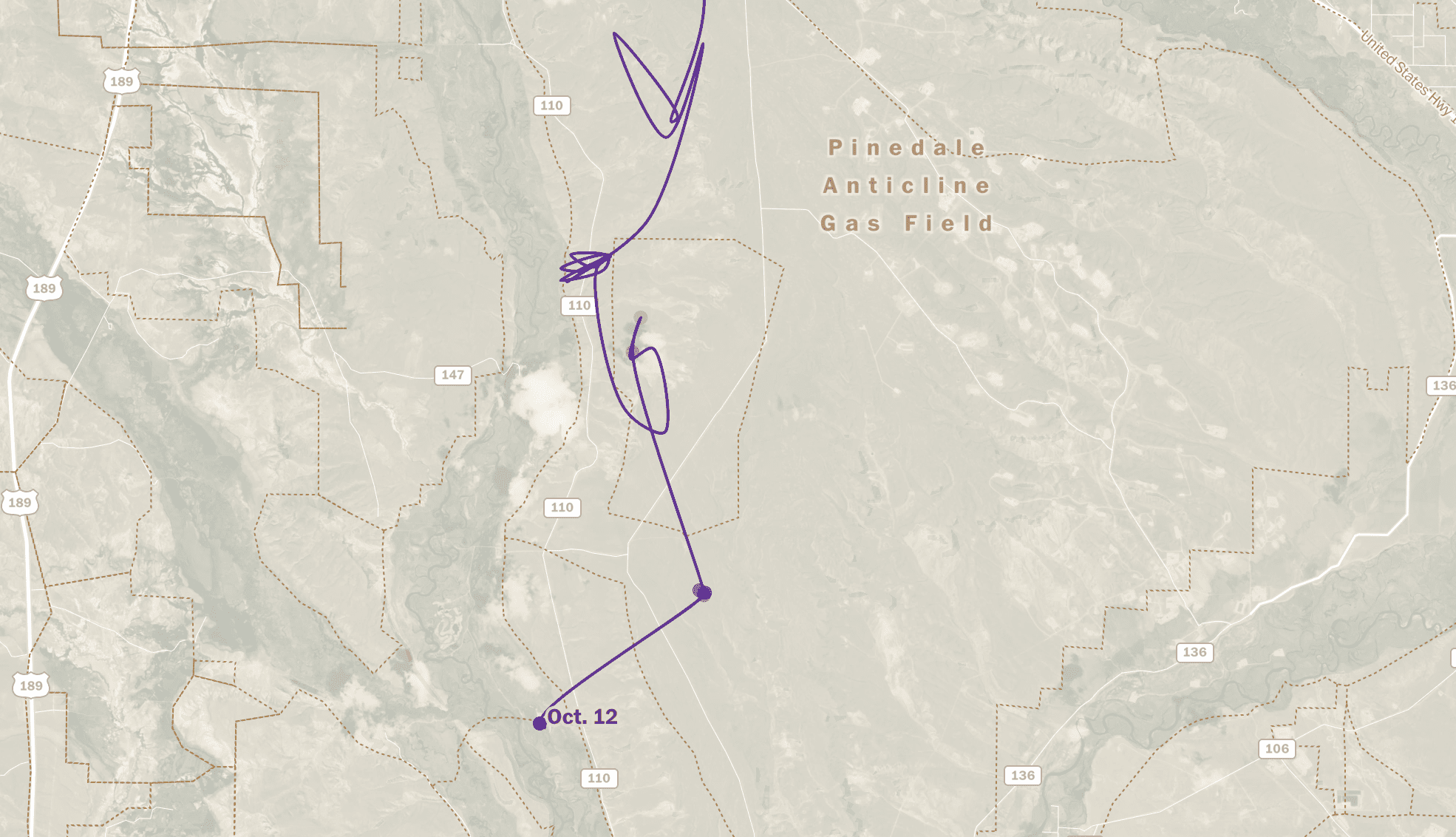 This interactive story from the Washington Post shows how long wildlife migrations can be, and how many dangerous barriers stand in their way.

Wildlife crossings often benefit an array of species. Check out this video of skunks, raccoons, badgers and coyotes all sharing the same crossing.

In this week’s briefing: building bridges to assist wildlife on their journeys, Italy gets homeschooled and a debate over the merits of poop-powered energy.

The remnants of a destructive form of mining have inadvertently helped the elk return to coal country for the first time since the Civil War.

More States Say of Roadkill: Why Waste It?

A no-waste, no-cost solution — endorsed by everyone from hunters to PETA — is finally going mainstream.

How an Unloved Bird Captured a Community’s Heart

The garbage-picking stork was considered a bad omen. Then the baby showers began.