Why ‘Work from Anywhere’ Works for Refugees

As remote employment becomes the norm, some refugees are discovering new opportunities and autonomy.

By: Peter Yeung
4 min read
Economy
A refugee from Kosovo in a camp in Macedonia. Credit: UN

Thon Mabior Jok was just 11 years old when he fled the violent conflict in his native South Sudan in 2002. He became one of millions of Sudanese forced from their homes, and settled in the sprawling Kakuma refugee camp in Kenya, which currently houses nearly 200,000 residents.

Jok soon undertook his studies in the public schooling system and by graduation he had proven himself such a gifted pupil that he was hired as primary school teacher at the camp. Yet while helping to educate and improve the life prospects of refugee children in Kakuma was fulfilling, his salary of $50 per month was less rewarding.

“The money was very little,” says Jok. “It was not enough for me to sustain a decent lifestyle and cater for all my needs. I had brothers and sisters to support, too.”

But one day, Jok’s life prospects changed. The International Trade Centre and the Norwegian Refugee Council launched digital training on modern, in-demand skills such as email marketing and social media campaigns in Kakuma. Jok realized that, just like any worker looking to make themselves more marketable, he would need to upskill.

In 2020, he successfully applied to become a freelancer on UpWork, one of a new wave of apps and websites that facilitate internet-based work that are giving refugees the chance to earn a good income, to better integrate within their host countries, and to experience a kind of liberty and agency in their employment that they are rarely afforded.

According to a report published in August by the International Labor Organization (ILO), digital gig work has the potential to play a transformative role for refugees and migrants. Unlike location-based gig work like food delivery and taxi services, or on-demand domestic labor that is often exploitable, unstable and underpaid, the report found that desk-based work on digital labor platforms offers refugees a much more promising path toward steady, fulfilling employment.

“What’s needed more than ever are long-term durable solutions for refugees,” says Drew Gardiner, a youth employment specialist at the ILO who contributed to the report, which focused on case studies in Kenya, Uganda and Egypt. “If we can get them into decent work, that will help their integration.”

Gardiner says the lower barriers to entry and greater informality of digital labor platforms make them practical for uprooted workers looking for a foothold. Jobs such as digital design and data entry can often be done from anywhere that has internet access. And platforms like UpWork, making use of a legal grey area, accept alien ID cards and refugee documents, circumventing the issue of refugees often being unable to obtain work permits. At the same time, they provide more opportunities for women and those in vulnerable situations, as well as encouraging innovation and upskilling through the cutting-edge job opportunities available.

Jok, who is now 30, works as a freelancer doing translation, data entry and social media campaigns from a computer lab in the Kakuma camp set up by the UN Refugee Agency (UNHCR). Like Jok, some 140 refugees living in Kenya’s Dadaab and Kakuma refugee camps have recently been trained in online freelancing, often with jobs such as translation or language teaching.

Increasingly, intermediary organizations between platforms and workers are also being launched to help the latter with negotiating employment terms, contracts and protections. In Kenya, there is Digital Lions, which calls itself a “fair trade” digital agency; freelancing platform Ureed caters to Egypt and across the Middle East; and  Bulgaria-based social enterprise Humans in the Loop employs and trains refugees to provide data services to companies training machine learning algorithms.

Ghazaleh, a 22-year-old Iranian who emigrated to Sofia, Bulgaria, is now working for Humans in the Loop as their annotation coordinator, managing teams of freelancers who provide labeling data for images and video to help power AI programs. Tasks might, for example, include looking at images of products in a supermarket and entering data for their prices and descriptions.

“Image annotation is easy, so it helps lots of people,” says Ghazaleh, who began her job in May after being trained as an annotator herself. “If you have a computer or PC at home, you can be an annotator from every place and every hour.”

But these resources are far from guaranteed for refugees, and therefore mean that work on digital labor platforms does come with serious limitations. In refugee camps, access to computers, suitable workspaces and digital infrastructure is a luxury that many residents are not afforded.

Jok echoes these concerns: the internet and electricity connections aren’t reliable in Kakuma. And with clients living in different time zones, sometimes there are tough working hours. As with all freelancers, the work can be irregular too. “It’s not perfect,” he says. “That’s for sure.”

Gardiner, of the ILO, points to other areas for improvement. Algorithms should be used to prioritize workers who have had fewer work offers than others. Collective bargaining and basic principles for negotiations between workers and employers need to be established. And platforms should create insurance schemes that cater specifically for individual refugee workers.

“We do promote the extension and inclusion of refugees in digital labor platforms, but we must have these minimum requirements,” he says.

Despite the teething problems, Jok is unequivocally positive about the opportunity that digital labor platforms offer to the millions around the world who have been forced from their homes.

“In Kakuma, we have lots of youths that are jobless,” says Jok. “Online platforms can create a new life. It’s helped me a lot and has given me a future. It can do the same for them.” 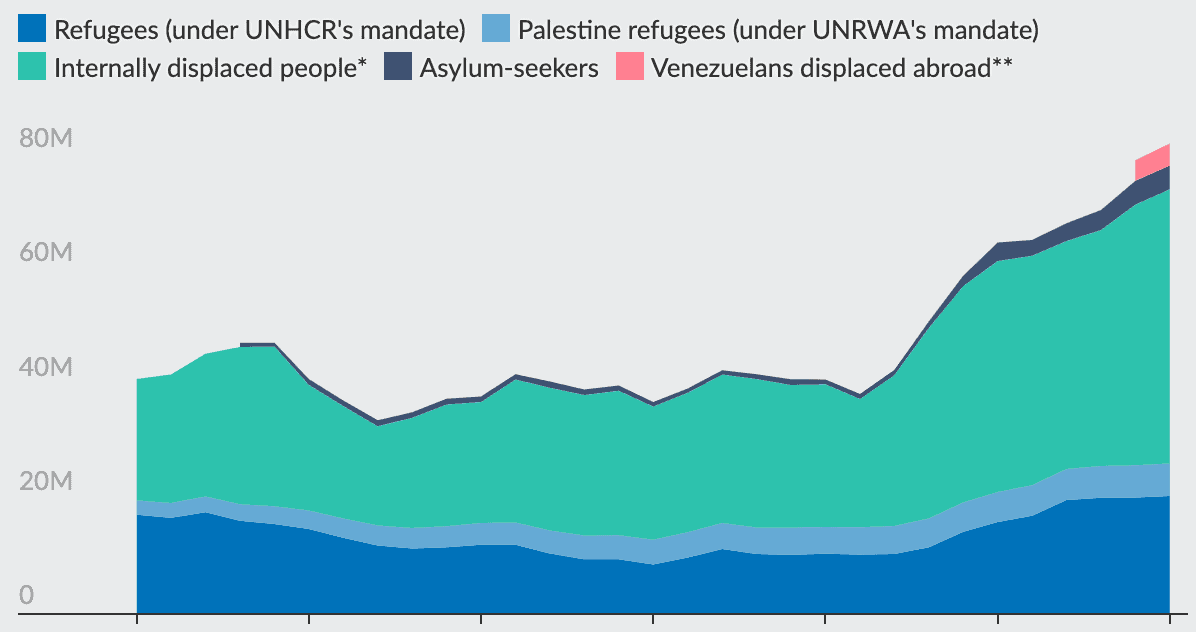 See a series of charts and graphs telling the story of the world’s refugee crisis at a glance.